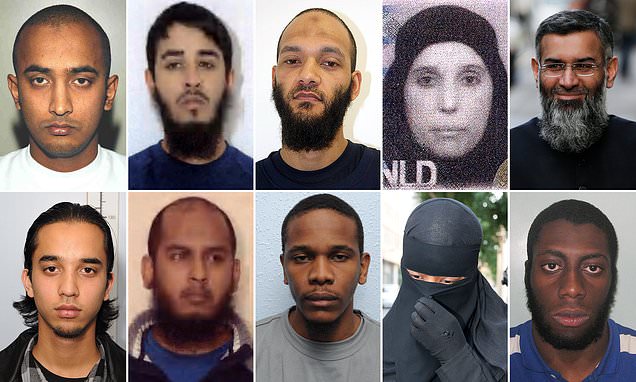 Who allowed enemy invasive aliens to enter our country in the first place? They have no natural right to be here – in the most densely populated country in Europe – but we have created an almost open door society where anyone is allowed to come in on any pretext, or to sneak in without any justification whatever, and remain here. It is our own politicians who WE voted into office who have permitted this disastrous danger to our society; the same politicians who brought in a law fifteen years ago to give early release on licence to all criminals once half of their sentence had been served, to reduce overcrowding in prisons and provide an opportunity for rehabilitation. However, many of these criminals will take the opportunity of early freedom to commit additional similar offenses, particularly those ideologically committed to their hostile cause.
What can be done about this avoidable danger to our society ? The long term solution, like that to many societal problems, is to stop voting for soft-touch Tory, Labour, Lib Dem and Green election candidates. Make it your New Year’s resolution to only vote for patriotic candidates in future, who will stand up for British values and protect British people. That is what parliaments are supposed to do, but sadly often fail to do. Too many politicians believe that they represent the British people without bothering to consult the public.
In the short term, dangerous invasive aliens should be deported, after being tattooed or branded on the forehead to ensure recognition if an attempt is made to re-enter the country, and subject to serious birching as punishment and deterrent. There must be neutral locations where such undesirable aliens could be placed, far from our shores, for the protection of our innocent citizens. If a terrorist is an indigenous British Muslim convert, like Rebekah Dawson, second from right, bottom row, who made videos glorifying the murder of unarmed fusilier Lee Rigby, then deportation could be replaced by birching alone and threat of worse if crimes were repeated.

2 thoughts on “Why are alien terrorists living in our country in the first place ?”